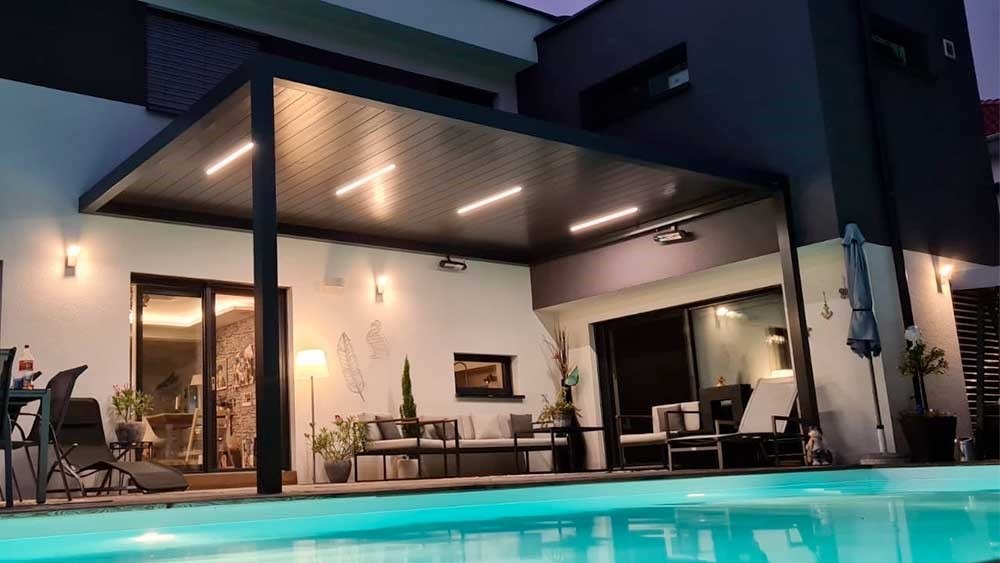 As a relatively popular outdoor construction type, pergolas have a lot of variation when it comes to different configurations or different color schemes. You can paint over pretty much every possible material that pergola could be made of. Despite all of that, the most popular color variations of a pergola are the most natural ones, or as close as it gets – it can be the color of the wood with wooden pergolas, or the dark grey, or black, color of an aluminum pergola.

Surprisingly enough, there are multiple use cases for a regular black pergola, and it fits quite well into the majority of the environments. It doesn’t really matter if your house is plain white or completely black, or any other combination – you can attach a black pergola to pretty much anything without it being too bad of a color combination.

Let’s look at a few of the examples showing the versatility of a black pergola. 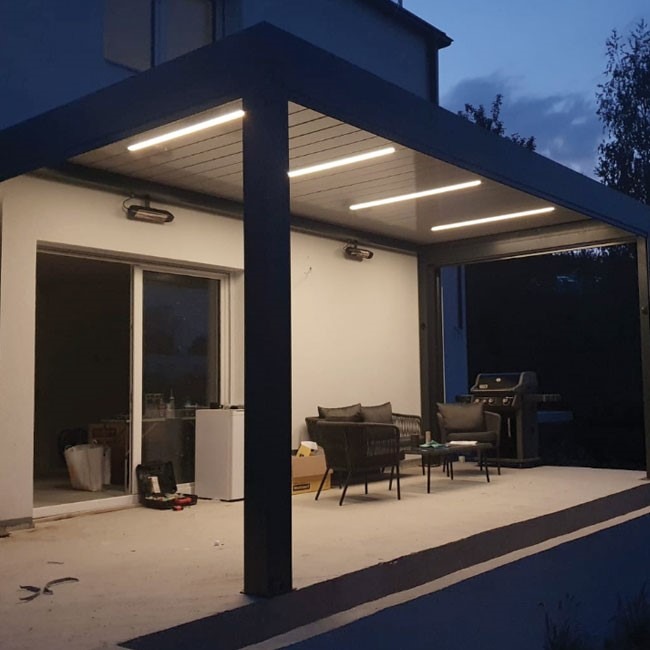 This first example comes from Austria, showing your standard pergola use case as an addition to your house with some benefits. For example, there are several different light sources, a set of several chairs with a table, and even a grill for days with better weather. There’s nothing too special about this pergola with concrete floor, aside from the fact that the black color of a pergola is a good contrast with the overall white palette of the entire house (and the concrete flooring, as well). 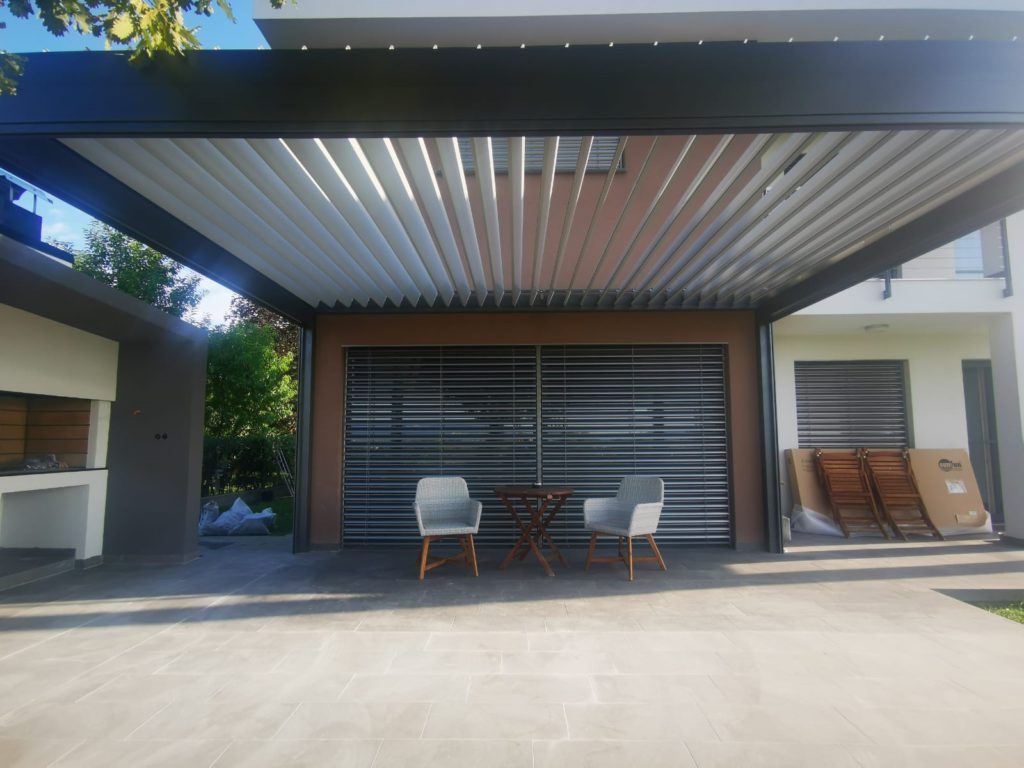 Another example of a relatively plain black pergola can be seen in Slovenia, as the example above shows. In this case the area underneath a pergola is significantly bigger, but mostly unoccupied, so it’s always ready for many different activities that you’ll want to indulge yourself into. There’s also the fact that the benefits of a good contrast can be seen inside of this pergola in the first place, since the borders of a pergola are black, but the roof panels are all white, making it a nice contrast for both pergola and the house that it’s attached to. 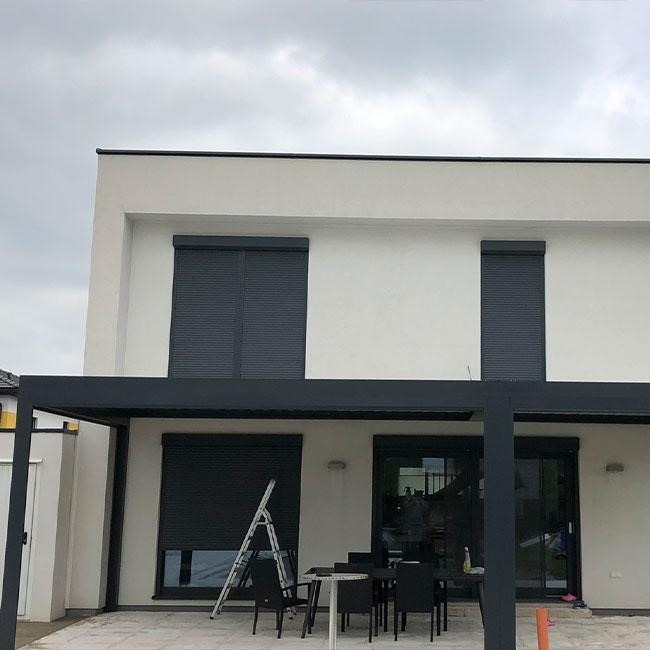 On the other hand, the contrast theme can be taken a step further with this example from Austria. As you can see, this case shows the advantages of a black and white contrast a bit more clearly – with house blinds being the same black colour, too. This allows for all the typical advantages of a pergola, but now with the stylish modern look of the construction in general. 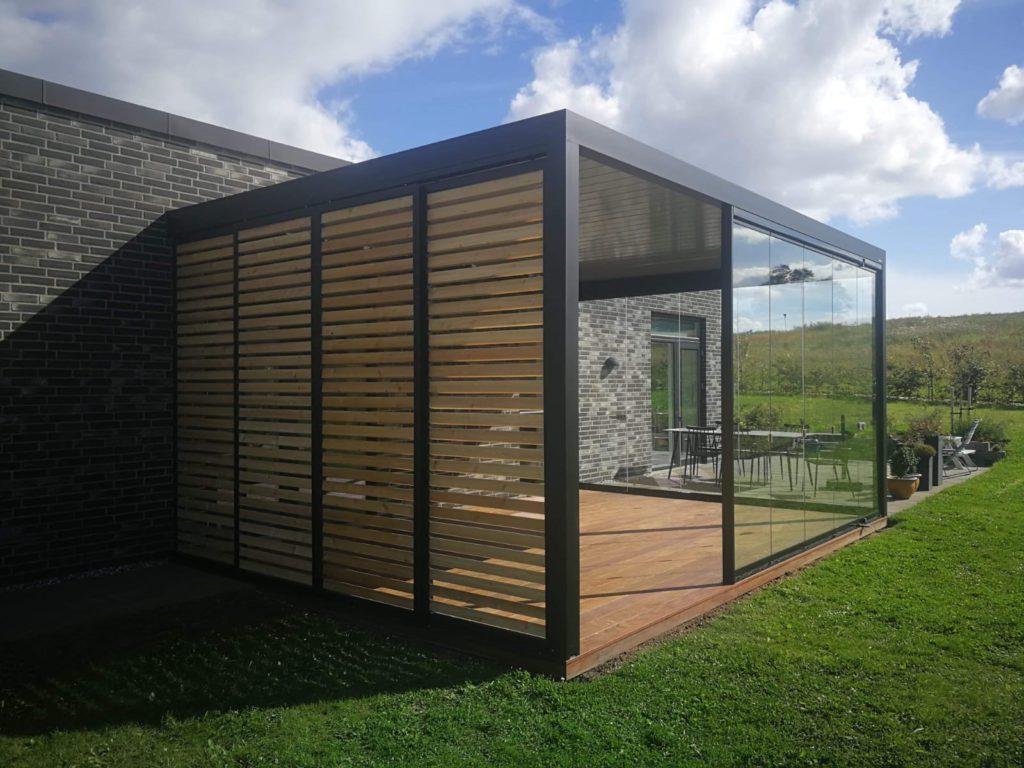 Another change in composition can be seen in this example from Denmark. In this case there’s a black pergola attached to a dark grey brick house, and it’s a nice alternative for people that don’t want to have their house covered in white paint. There are also several customization options within this pergola, like glass panels from two of the three sides, a third wall covered by wooden planks, as well as the wooden floor under a pergola in general. All this shows that the area inside of a pergola is treated more like an extension of the house and less like a separated construction.

As we’ve said at the beginning, some people prefer their house to be covered in multiple different colours, and this is where black pergola shines the most. In the example above a pergola serves as a visually dividing point that separates the black part of the house from the white one, making it a nice composition that is comfortable to look at. The fact that the pergola stands at the edge of a pool, as well as the multitude of furniture underneath this pergola, shows that this area is made for relaxation and recreation as the primary purpose.

All of the examples above are black pergolas, but they’re also technologically quite advanced on their own. Aluminum pergola Agava can deliver multitude of different advantages that are absent with other pergola materials like wood or steel, since the need for maintenance is nonexistent, the overall texture of aluminum makes the entire structure look far more modern, and the Agava part of the pergola makes for a comfortable choice for any environment that you can change at will, making it either a solid roof or a gateway for more sun to come in.

Throughout the years, there’s been a lot of different outdoor backyard structure types, each with different purposes,...

Surprisingly enough, not all of the pergola designs are about creating shade for the people inside of it. Despite the fact...