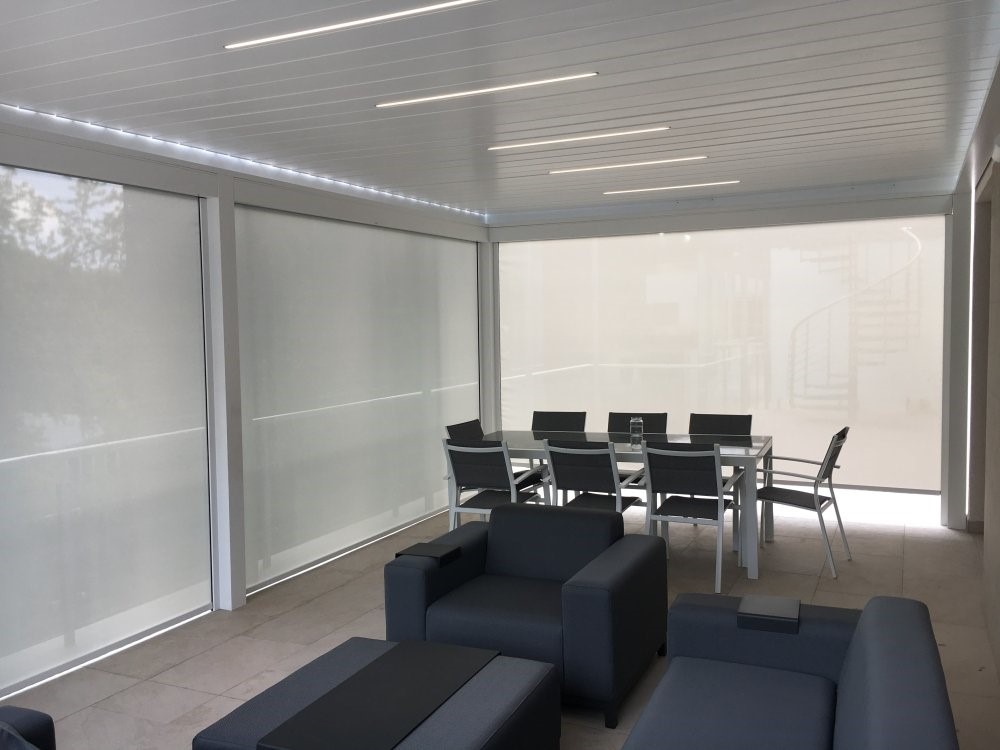 White Pergola Examples and Use Cases

One of the biggest advantages of pergolas in general (as well as patios, gazebos and other types of outdoor structures) is their ability to blend in to the environment and not stand out unless that’s the initial intent. And painting your house white is a relatively common occurrence for a lot of people, that’s why white pergolas are quite popular in their own way.

Now we’ll go over a few of the examples when it comes to white pergolas and their use cases.

Here’s a good example of a standard pergola case – it is attached to a house and supports itself using several beams of the same color and material as the roof. These basic variations of a white pergola allow to enjoy all of the benefits from a regular pergola – shielding from the harsh weather conditions, allowing for more fresh air, and so on – while looking like a part of the house to begin with.

Of course, it’s not the only one option when it comes to different variations of a white pergola. 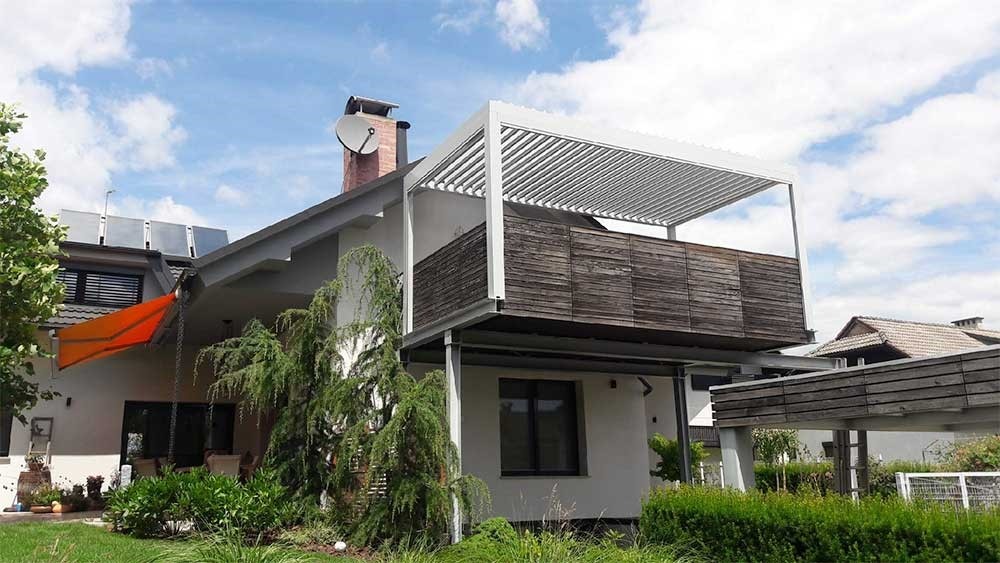 Not all of the examples have to be that complicated, though. Here’s another white pergola, attached to a house in Slovakia. In this case, the entire area underneath a pergola is treated more like an additional room of the house, and less like an outdoor space – thanks to the roof being turned solid and the usage of additional covers at the sides of the pergola. This approach can be used to increase the overall house space with the ability to turn it into something different entirely in a short period of time – by simply removing the covers from the sides and changing the roof’s settings to let more air in.

All of the examples above have been attached to the house, in one way or another. That’s not the only option when it comes to pergola variations. 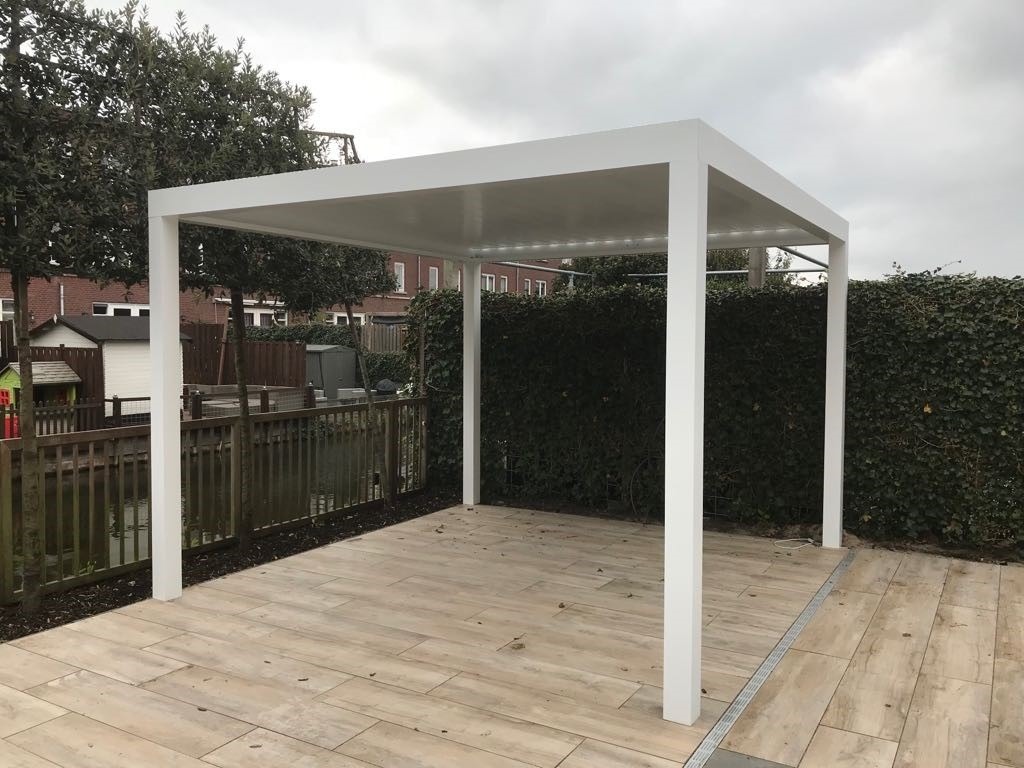 This pergola is a freestanding one, built at the edge of the client’s outdoor site. The choice of a white color in pergola’s design creates a nice combination of colors with the floor material. Such an option is quite useful if the client wants to create a secluded space for yourself away from the house, and the adaptability of a pergola allows for a plethora of different choices, with different roof options and the ability to use fabric to cover the sides of the pergola from all sorts of weather conditions.

The addition to a single family’s house is not the only use case for a white pergola. Quite a lot of restaurants are using pergolas for various needs, as well. 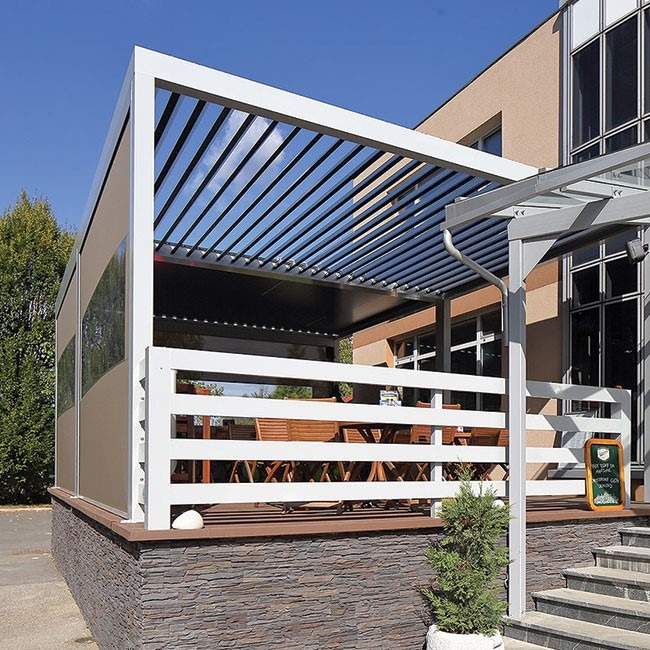 As with any use cases, restaurants can use various advantages of a pergola to satisfy their own needs. In the case above there’s a sizable white pergola that’s used as an outdoor space in Slovenia. Aside from the obvious railing at the front, you can see that at least one wall of the pergola is made solid (with a segment for a window) to block some of the harsh weather conditions like wind or rain. Each of the roof parts can be adjusted to either allow for more air and sun inside or to create a shade and/or protection from rain, snow and so on. These types of additions to a restaurant are quite popular in many countries and many restaurants that want to have an outdoor sitting space.

There are also other pergola variations that are used by restaurants, as well. 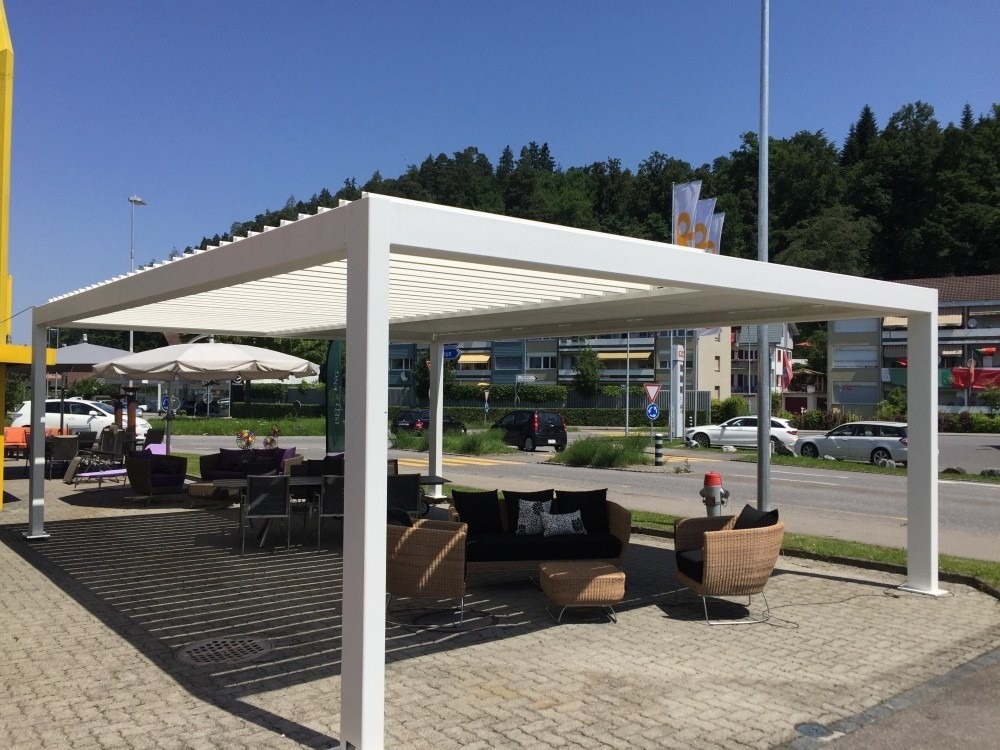 This pergola from Switzerland is freestanding, and it is used to create a sizable shade for the people sitting inside of it. The sides of the pergola are lets open to allow for more air, and the color choice doesn’t stand out all that much either, making it a nice addition to a lot of restaurant-related businesses.

All of the various white pergola examples above are made from aluminum, allowing for an impressive solidity of the construction, the overall modern look of the material in the first place, and the fact that it requires little to no maintenance and can exist for a prolonged period of time.

Other color variations of pergolas are also available, including the original dark grey color of aluminum, or any other color that matches the color palette of your house. The bioclimatic pergola Agava can be ordered in more than 1600 existing RAL colors.

Traditionally pergolas were made from wood and the addition of foliage was quite common. At the same time, a lot of...

This website uses cookies to improve your experience while you navigate through the website. Out of these cookies, the cookies that are categorized as necessary are stored on your browser as they are essential for the working of basic functionalities of the website. We also use third-party cookies that help us analyze and understand how you use this website. These cookies will be stored in your browser only with your consent. You also have the option to opt-out of these cookies. But opting out of some of these cookies may have an effect on your browsing experience.
Necessary Always Enabled
Necessary cookies are absolutely essential for the website to function properly. This category only includes cookies that ensures basic functionalities and security features of the website. These cookies do not store any personal information.
Non-necessary
Any cookies that may not be particularly necessary for the website to function and is used specifically to collect user personal data via analytics, ads, other embedded contents are termed as non-necessary cookies. It is mandatory to procure user consent prior to running these cookies on your website.
SAVE & ACCEPT